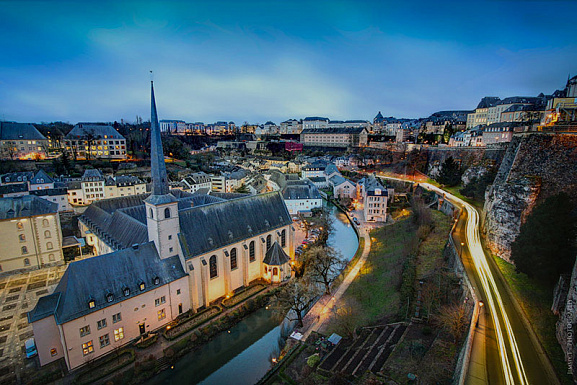 On October 27, the Belarusian-European Economic Forum took place in the Neumünster Abbey Cultural Center of Luxembourg that gathered more than 200 participants. The event gave a unique opportunity for European investors to discover strong aspects of the Belarusian economy (IT, logistics), as well as to discuss specific areas of cooperation

The main goal of the forum is to create an effective and result-oriented, multi-level platform for establishing a stable interaction between Belarusian business entities, credit and financial institutions with European partners.

The delegation of Belarus, headed by Prime Minister Andrei Kobyakov, was represented by the leaders of the key ministries and departments of the country.

"We are here to show you Belarus as it is, to dispel stereotypes, to present opportunities for your projects, to the huge common market of Belarus, Kazakhstan and Russia," the Prime Minister of Belarus said at the opening of the forum. “We have an excellent infrastructure, a powerful and reliable energy system. We ranks 65th in the world from 155 countries on the infrastructure quality. These are World Bank data, which speak about the infrastructural consistency of Belarus. We have a competitive, high-quality and inexpensive workforce. According to the Human Development Index, Belarus is 51st out of 187 countries. The combination of these factors with strong institutions of state power creates unique opportunities for investing in Belarus, " he said.

The forum is an opportunity to hear first-hand information, said EU Commissioner for Enlargement and Neighborhood Policy Johannes Khan. "Today we are discussing how Belarus can become more attractive to investors," said Johannes Khan. “I want to note that the overall business climate in Belarus has improved. We are strengthening our support. 30 million euros - this is twice as much as planned - the EBRD has created a special program for small and medium-sized enterprises. In addition, 5 million euros are allocated for microfinance for small businesses. We will also provide access to new markets. We have already supported more than 200 enterprises in Belarus. I see considerable potential in the development of small and medium-sized businesses, digital technologies. "

Belarus has European legislation; it guarantees the rights of the investor. The application of the British, Swiss, American and any other law and arbitration is allowed. In Belarus, one of the lowest corporate profits taxes in Europe is 18%. Almost all of the taxes are exempted from high-tech enterprises.

"We are committed to preserving the open nature of the economy, attracting foreign investment. At any state enterprise, joint production can be established. Industry, here I mean engineering, petrochemistry, electronics, is a quarter of Belarus' GDP. We welcome the arrival of transnational companies, market leaders in these and other spheres, " Kobyakov said. At the same time he stressed that the most important thing is not money that will go to the budget, the key issues are the effective owner, the future of the enterprise and its contribution to the creation of new jobs, as well as the economic growth of Belarus.

"We are convinced that business freedom, low tax burden, budgetary and macroeconomic discipline are necessary conditions for long-term growth. They are necessary, but insufficient. We are ready and will do more to enhance the competitiveness of the national economy, its attractiveness to foreign capital, " the Prime Minister stressed.

He informed that the government of Belarus has a strategy that gives results. The export structure is being transformed in favor of new high-tech goods. The economy of Belarus is becoming more innovative with the share of the IT sector in GDP at the level of the most advanced countries.

"You can be sure: we will not ignore your proposals and specific investment projects. On Greenfield projects, we provide almost tax-free regime in Great Stone. For the sphere of services and science, we offer the largest IT-park in Central and Eastern Europe, " said Andrei Kobyakov, addressing the forum participants.

Representing opportunities for doing business in the Great Stone industrial park, head of the park administration Alexander Yaroshenko stressed that at its creation the factors of advantageous geographical position of Belarus at the intersection of the most important trade and transport corridors have been taken into account and all residents note that this moment is very important for them.

“Most registered residents are going to make the Industrial Park their platform for entering the EU and EEU markets. The Republic of Belarus borders on two largest markets - the European Union (28 states, more than 500 million potential consumers) and the Eurasian Economic Union (Russia, Belarus, Armenia, Kyrgyzstan, Kazakhstan - over 180 million consumers), this enables us, on the one hand, to consider the Park as the Eastern gateway to the EU, and on the other hand, gives us the opportunity of free goods, capital, labor movement in the EEU market.

The Park enterprises’ products can be exported to the markets of Russia, Kazakhstan, Armenia, Kyrgyzstan without customs duties and economic restrictions. The reduction of transport costs and terms of transportation when exporting goods through proximity to neighboring European countries and the use of transport corridors through the Baltic countries in combination with a preferential tax treatment let us significantly reduce the cost price of goods produced in the Park,” said Alexander Yaroshenko.

The total readiness of the engineering and transport launching area infrastructure of ​​354 hectares constitutes 99.4%. 5 of 10 start-up complexes are put into operation.

The park residents registered to the current moment have started implementing projects in such directions as integrated logistics, new materials, engineering, electronics, storage and processing of large data amounts, telecommunications, R&D activities. 9 park residents will start their activities this year.

Belarus is open to foreign investors, which is confirmed by one main fact: the whole territory of the country falls under one or another preferential regime, which allows organizing business in Belarus at an incredibly low cost. This was told by Deputy Director of the National Agency of Investment and Privatization of Belarus Mikhail Dashuk.

"Of course, the state sees an interest from the foreign investor and understands that changes must occur in order to remain high in the world ranking. For example, over the past year, the number of bills aimed at increasing the inflow of external capital has increased. The most important change is the introduction of a visa-free regime for 5 days for citizens of 80 countries. By 2019 a visa-free stay of foreign citizens in Belarus is planned to be increased to 10 days, and even up to 30 days. Such a measure is a positive signal for potential investors that our country is open to new ideas and opportunities. At present, the possibility of making a number of changes to the laws "On the privatization of state-owned companies" and "On investments" is already being considered," he said.

Mikhail Dashuk also stressed that the National Agency of Investment and Privatization is the link between foreign business and government agencies. "This year alone, about 300 potential investors from more than 30 countries of the world applied to us. The branches of the economy in which they are ready to invest are completely different. We are always open to new offers and are ready to help any investor who turned to us. In addition, the Agency is actively engaged in the search for and selection of investment projects that may be of interest to a potential investor. We know what the country is interested in, what products are lacking, we constantly interact with already functioning enterprises," said the NAIP’s Deputy Director.

Within the framework of the forum there were presentations of key projects implemented in Belarus, opening up opportunities for profitable investments, and a number of agreements were signed. Thus, Great Stone Industrial Park was replenished with a new resident. It became Lants Manufaktur Ltd., which plans to open LED lamps and LED Technology lamps until 2020. The volume of investments will be at least $ 500 000. In addition, an intention agreement to implement an investment project between the administration of the park and the company Dieffenbacher (Germany) was signed. It is about the organization of innovative production of products from composite materials with the appropriate engineering center. The agreement on intentions with JSC Duisburger Hafen (Germany) was also concluded. It is assumed that the company owning the largest river port of Europe - Duisburg, will become one of the founders of CJSC Industrial Park Development Company. A memorandum was also signed between the Ministry of Transport and Communications of Belarus and the European Bank for Reconstruction and Development on cooperation in the investment project "Road P80 Sloboda - Papernya, km 0.000 - km 14.770" and other documents.