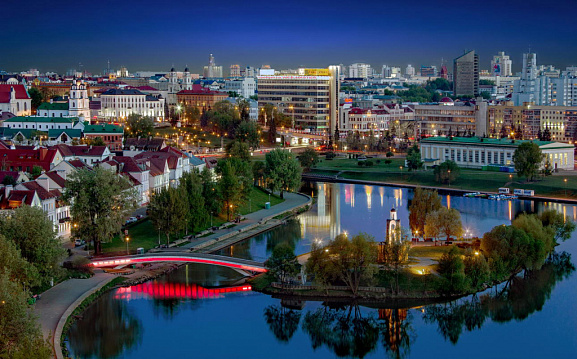 On September 28-29 2017, the Belarusian Investment Forum (BIF) was held in Minsk, which gathered about 500 participants from 29 countries, including CIS, the European Union, Asia, the United States of America.

Representatives of major international and foreign financial institutions, private foreign investors, representatives of government, national business and the expert community discussed the opportunities for doing business in the country, as well as the ways to promote Belarus as a promising investment site.

"Belarus has been continuously working to create comfortable economic, legal and institutional conditions for foreign business," Sergei Vaganov, Acting Acting Director of the NAIP, said in his welcoming address at the opening of the forum. "In the country, the tax regimes attractive to investors have been created and are successfully functioning. The guarantee of safety and protection of investments is ensured. By creating joint companies, opening production in Belarus, a foreign investor has an unhindered access to the market of the Eurasian Economic Union, which is about 182 million consumers and a serious human, resource, scientific and technical potential. Year by year Belarus shows its openness to the outside world and its readiness for cooperation. For example, a 5-day visa-free regime was introduced for citizens of 80 countries. And now the work to extend the visa-free regime for up to ten days is under way", he stressed.

During the plenary session, First Deputy Prime Minister of Belarus Vasily Matyushevsky stated that the legislation of Belarus was formed on the basis of the best world practices and provides for the guarantee of observance of the rights of the investor, equal conditions for domestic and foreign capital, the possibility of applying international law, etc. More than 60 international agreements on the promotion and protection of investments have been signed and are in force.

"The favorable investment climate is evidenced by the fact that the number of companies with foreign capital has increased by almost 40% over the past four years. These companies provide about a quarter of the total revenue and exports of our country, "the First Deputy Prime Minister said.

He stressed that the liberalization of business is positively assessed by the international community. "The Government of Belarus is actively developing cooperation with international financial organizations. We have a fairly serious portfolio with the World Bank, we are actively cooperating with the European Bank for Reconstruction and Development," said Vasily Matyushevsky.

Managing Director for Economic Affairs of the countries and sectors of the EBRD Mattia Romani, in turn, noted that the European Bank for Reconstruction and Development considers Belarus as a very promising country from the investment point of view, especially in the areas of woodworking, energy, and green economy.

"Now it is the right time for cooperation with Belarus, we see great potential. Therefore, we work in the financial sector, forestry and construction. We also invest in energy - in projects on renewable sources, alternative sources of energy, for example, solar," he said.

During the event, it was stressed that Belarus has rather advanced investment legislation with various preferential regimes, which creates economic preconditions for investors to enter small and medium-sized cities, rural areas, free economic zones, Great Stone industrial Park and the HTP.

"Now 19 residents from different countries are legally registered in the park: 12 residents from China, 3 from Belarus, there is a company from the United States, a company from Lithuania is engaged in the production of environmentally friendly packaging," said Alexander Yaroshenko,  head of the administration of the Great Stone Industrial Park. "We welcome the arrival of our Russian partners - this is a joint Belarusian-Russian project to grow artificial sapphires on an industrial scale. It is a rather interesting topic, I hope it will be developed further in the park. "

It was planned that 20 residents would be attracted to the park. "But of course we are waiting for more of them. Now we have several European companies, from Germany, Switzerland, Italy. We would like investment geography and residents of our park to expand," the head of the park administration stressed.

Since the beginning of the work, the total financial investments in the park amounted to $ 300 million. These are the funds of either investors or Belarus. "These figures show that the activity in the park is increasing, as well as the number of residents", said Alexander Yaroshenko. In 2017 investors will additionally master about $ 70 million.

The government constantly monitors the investment and business climate of Belarus, improves it. "We work to create the most favorable conditions for the formation and functioning of the business environment. In close cooperation with the business community, an unprecedented package of documents was prepared to improve the business environment, eliminate unnecessary demands and involve the population in active economic activity. The package is quite revolutionary. There are ten fundamental documents that, from our point of view, should drastically change the entire business environment," said Vasily Matyushevsky.

Director of the International Finance Corporation for Europe and Central Asia Tomas Telma recalled the relatively high position of Belarus in the rating of Doing Business. "This rating is a metric, an indicator. It is gratifying that today Belarus is one of the leading countries in the field of reform, " Tomas Telma said. He also noted that much has been done to attract investors to the country in the financial and banking spheres.

"In the medium term, I rate the chances as high. The work is carried out practically on all state banks, with the exception of Belagroprombank. The forms are different, the approaches are different, but the banks conduct this work, " said Vasily Matyushevsky. Regarding raising capital in the country's largest bank, Belarusbank, Vasily Matyushevsky said that a decision was made on more detailed pre-sale preparation.

"The difference in strategy is a year or two," he said. As for Belinvestbank, the arrival of foreign capital is planned within a year. Also, the First Deputy Prime Minister does not exclude Chinese investments in the banking sector of Belarus.

On the margins of the forum the IT-sphere was well discussed, which became one of the brands of Belarus. Head of Sales for Central and Eastern Europe, Russia and the CIS Facebook Inc Anna-Maria Treneva from more than 20 countries of her region singles out two, in which it is worth investing actively. "Currently, there are two countries among 20 other of my region with the largest number of start-ups with high potential are present. This are Slovenia and Belarus, " Treneva said.

One of the most important IT-events in 2017 was the sale of the Belarusian startup AIMatter to the American company Coogle. "Belarusian jurisdiction for a long time remained incomprehensible to foreign investors. The deal with Google in this sense has become a precedent. I think that after it, other companies, investors, will think "since Google was not afraid, then we, the X company, should not be afraid to go to Belarus," said AIMatter founder Yury Melnychek.

The IT-entrepreneur said that he plans to open an investment fund. He will work with Belarusian companies specializing in computer vision and machine learning. "Have I assessed the risks? I can look at the entire situation in Belarus from the inside, not from the outside. And I see that the opportunities that exist in Minsk justify the risk, "Yury Melnychek noted.

The IT community is pinning great hopes on the new decree of the President on the status of the High-Tech Park. Draft Decree on HTP 2.0. contains provisions that relate to and simplify the legislation in the field of foreign trade transactions.

"Today there is a fierce struggle for personnel. Five countries from the nearest entourage introduced a start-up visa. We see a struggle in the sphere of legislation, regulation of intellectual property. In the new decree, we want to play in advance. We set ourselves the task of attracting world development centers, centers from the higher league," said Alexander Martinkevich, Deputy Director for marketing and development of HTP.

"This is not just a decree on HTP. This is digitalization of the entire Belarusian economy. Our capabilities are not enough, there is a possibility of serious players coming from at least the neighboring countries," explained Vasily Matyushevsky.

9 events of the business program took place on the fields of the Belarusian Investment Forum. On the first day, IT, the financial and real sectors of the Belarusian economy, investments in infrastructure, the benefits of working in Great Stone Industrial Park were discussed, as well as the problems and opportunities for business in the green economy and energy.

The Agency organized more than 70 meetings of Forum participants with representatives of Belarusian companies, republican government bodies and other organizations.

During the second day of the forum, participants visited the sites of the Park of High Technologies and Great Stone Industrial Park, where they were able to discover favorable conditions for doing business.

A meeting of the Standing Committee of the Advisory Council on Foreign Investments under the Council of Ministers of Belarus (FIAC) was held within the framework of BIF. Representatives of state bodies and the business community of the country discussed the most topical issues of foreign investors' activity in Belarus.

During the meeting, experts discussed issues of changing legislation in the field of investment, corporate law, improving the regulatory environment for business. In addition, a number of issues related to the application of subsidiary liability, improvement of regulation of relations in the field of construction were considered.

The organizer of the Belarusian Investment Forum is the National Agency of Investment and Privatization with the support of the Ministry of Economy of the Republic of Belarus.